The Gates Foundation has sunk $15 million into developing GMO 'super bananas' with high levels of pre-Vitamin A, writes Adam Breasley. But the project is using 'stolen' genes from a Micronesian banana cultivar. And what exactly is the point, when delicious, popular, nutritious 'red bananas' rich in caroteinoids are already grown around the tropics?

Among the controversial projects funded by the Bill and Melinda Gates Foundation is the development and testing of a biofortified GMO banana developed to boost its iron, Vitamin E and pro-Vitamin A content.

To this end the Foundation, via its Grand Challenges in Global Health Initiative, has so far given $15 million to Queensland University of Technology for the program run by Professor Dr James Dale, with a latest tranche of $10 million handed over this year.

The declared purpose is to roll out nutritional benefits across the tropics, but initially to India, Ugana, Kenya, Tanzania and Rwanda - all countries that sufer from widespread nutritional deficiencies.

And Dr Dale is certainly enthusiastic, telling the Independent that "This project has the potential to have a huge positive impact on staple food products across much of Africa and in doing so lift the health and wellbeing of countless millions of people over generations."

So what's so controversial about that?

What Dr Dale has done is to take the high beta-carotene banana gene for his GMO 'super-bananas' from an existing Fe'i banana variety from Papua New Guinea, following a study that compared ten cultivars with yellow to orange fruit.

The 'winner' was the Asupina cultivar, which had the highest level of trans beta-carotene - the most important pro-vitamin A carotenoid, with 1,412 μg/100 g of fresh weight, more than 25 times more than the level in the Cavendish cultivars that dominate the international banana trade.

The trouble is, this makes Dr Dales' GMO 'super-banana' a clear case of biopiracy. The original Asupina, collected 25 years earlier from Papua New Guinea and held by the Queensland Department of Primary Industries (Q-DPI), is the rightful property of the nation and the communities that developed it.

For this as much as any reason the humanitarian credentials of the GMO 'super-banana' are questionable. Most importantly, 'red bananas' rich in pre-Vitamin A are already grown around the world with no need for any genetic modification.

They are popular across south Asia, the Pacific, Africa and Central and South America, and many varieties are prized for their soft flesh, sweet flavour and aroma of stawberries.

Funded by the Bill and Melinda Gates Foundation to the tune of $15 million, and currently in Iowa undergoing human feeding studies, the GMO banana human feeding trials appears have been designed for marketing purposes. Certainly Scientific American calls them simply "market trials".

They are certainly not trials for establishing the safety of GM bananas for human consumption, nor are they the thorough clinical studies that would be expected for a novel GMO food intended for daily consumption for vulnerable malnourished African infants.

Dr Dale himself has said he sees the GMO bananas are a door-opener to help facilitate the uptake of many more GMO crops in Africa and globally.

Both Dr Dale and Gates Foundation must surely be aware that previous human feeding trials of so-called 'Golden Rice' in the US and in China have been plagued with violations of research ethics and are currently mired in international scandal.

The American Journal of Clinical Nutrition which published the Tufts study is reportedly retracting the article due to these violations of ethics. Nevertheless the Tufts study is positively referred to in the Australian government's OGTR risk assessment for the GMO 'super-bananas'.

Back to the biopiracy issue: Fe'i bananas (Musa troglodytarum L.) are a traditional food across the Asia-Pacific, found in an area ranging from Maluku in Indonesia to Tahiti and Hawaii in the Pacific.

In 1788, Daniel Solander, accompanying botanist Joseph Banks and James Cook on the voyage of the Endeavour, noted several varieties of Fe'i bananas used in Tahiti.

In the early 2000s the late biodiversity researcher and local foods promoter Lois Englberger - whose PhD at the University of Queensland was a "multiple methodology ethnographic study assessing the natural food sources of vitamin A" in the Federated States of Micronesia (FSM) - did the groundbreaking scientific work on rediscovering these high-beta carotene containing red indigenous bananas.

As she brought the existence of these red Fe'i bananas to the attention of the world scientific community, she reported on multiple varieties that are deliciou s when eaten raw, and others when baked or boiled.

She also helped to found the 'Let's Go Local!' program with the NGO Island Food Community of Pohnpei, to promote the cultivation and consumption of nutritious local foods including indigenous banana cultivars - the use of which had been displaced by imported food cultures.

Thanks to the campaign the use of these varieties has increased sharply. Indeed it has been so successful that the 'Karat' banana - so called for its orange flesh and high beta-carotene content - has been adopted as the state emblem of Pohnpei and stamps have been issued featuring the Karat banana. 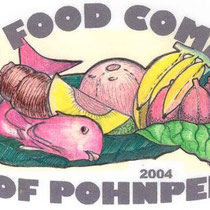 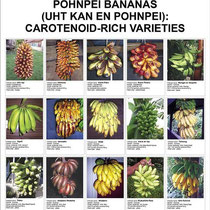 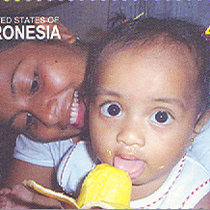 GMOs are the solution! (But what was the problem?)

All told, Dr Dale's globe-trotting GMO bananas are a globe-trotting case of biopiracy. The PNG Asupina variety is not "wild" as Dr Dale has claimed, but a domesticated Fe'i cultivar developed over the centuries by indigenous farmers.

The traditional knowledge they have used comes directly from Micronesia and is the heritage of communities across the Asia-Pacific region. The Q-DPI collection from which Dr Dale and his colleagues sourced the Asupina variety should have been a collection held in public trust.

Meanwhile, Dr Dale has lectured in Indonesia, supported by the Australian Embassy in Jakarta, claiming GMOs are a necessity to save bananas from extinction, in particular, he stresses, GMOs are necessary for insuring continued global production of commercial banana varieties.

Underplaying the very biodiversity on which he has have based his GMO bananas, Dale's more immediate purposes appear to be in bio-prospecting local banana varieties for potentially commercially valuable genetic traits.

Tellingly, another gene for disease resistance which holds vast economic potential for commercial banana production they have taken from banana varieites from Maluku in Indonesia.

An in-depth 2011 article in the New Yorker on the GMO bananas, in which the much touted vitamin A 'super-bananas' barely rate a mention, suggests that the GMO banana project's larger ambition is to enter the international banana trade, setting itself up as the United Fruit of the 21st Century.

Perhaps that is why the GMO banana project is focused on India and Uganda - the first and second biggest producers of bananas (See: 'We Have No Bananas' in The New Yorker by Mike Peed, 10th January 2011).

The New Yorker article suggests the real intended market for the GMO banana is the rich western consumer for whom bananas remain one of the most popular fruits, and notes that Dale "seemed pleased that neither Chiquita nor Dole would own his creation."

And this is surely correct. As already noted, red bananas are grown around the tropics and subtropics. So why bother making a GMO banana merely to reproduce what already exists and is both popular and widely available? The answer must lie in the fact that Dale's project is to produce a GMO version of the Cavendish banana, the main variety in international trade.

Could his real intention be to capture a commercial market in selling a premium, novelty 'high nutrient' banana to northern consumers? And in the process pave the way for other GMO bananas with commercially desirable qualities?

Certainly the GMO 'super-bananas' are an expensive distraction away from real solutions for vitamin A deficiency, despite Bill Gates's obvious personal enthusiasm.

If he is so worried about Vitamin A deficiency in Uganda, as he claims, all he needs to do is to promote suitable 'red banana' cultivars for cultivation in areas where they have not traditionally been used.

Cultivars rich in pre-Vitamin A caroteinoids are already grown around the world - and are moreover delicious, known to be safe and nutritious, available for immediate cultivation - and free of patent restrictions, royalty fees and other incumbrances of the global intellectual property regime.

But then, perhaps that is the problem.