STOP GMO Pacific is an NGO dedicated to informing the public about the risks of Genetically Modified Organisms (GMOs) in food, agriculture and the environment.

Founded in July 2012, it is based on the work of a team of volunteers, who since 2010, have been working on the issue of GMOs in New Caledonia and the Pacific. 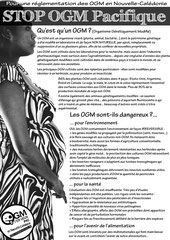 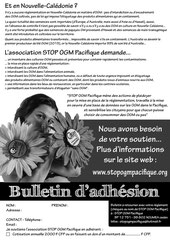 The association STOP GMO Pacific have met the majority of institutions concerned with the issue of GMOs in New Caledonia to address the lack of regulation on GMOs : Government of New Caledonia (DAE, DAVAR, Regional Cooperation) services, the Southern Province in charge of environment and agriculture (DENV, DDR), the customary Senate agriculture Committee of Congress, the Pacific Community (SPC), the agricultural professionals and research (Chamber of Agriculture, agricultural Research Institute Caledonian), and a number of politicians who were willing to receive the Board of Directors of STOP GMO Pacific. The association also met with several local interlocutors.

Members of STOP GMO Pacific requested the Advisory Committee for the Environment (body attached to the Congress of New Caledonia which includes all institutions with expertise in environment): issuing the need for the establishment of a GMO regulation, and at present, working groups have been established to:

STOP GMO Pacific has largely driven this work based on legal GMO specialists in France.

Relationships and activities outside New Caledonia

Networks in the Pacific

STOP GMO Pacific is linked to a dozen organizations and associations concerned with the issue of GMOs in Australia, New Zealand, Hawaii, Wallis and Futuna ...

The association has participated in Oceania 21 meetings by presenting the situation of GMOs in the Pacific Island States which has resulted in the declaration of their intention to establish a regional monitoring for GMO -free agriculture, in order to preserve biodiversity and traditional Pacific agriculture.